Blog, Things to do

Saigon, or Ho Chi Minh City, is one of the largest cities in Vietnam by population. A highly metropolitan and cosmopolitan landscape, the city is home to one of the highest concentration of historical, cultural, and culinary attractions in all of Southeast Asia. In fact, the sheer amount of things to see and experiences to be had in Saigon are so bountiful and diverse that they can sometimes seem intimidating to the first time traveler. It is not always easy to navigate the intricate cultural and literal mazes of Saigon’s landscape. And while ideally, every traveler should take as much time as they can to explore what Saigon has to offer at their own pace; there are four things that anybody looking to engage in the authentic Saigon experience should never miss out on, and here they are, in no particular order.

I. RIDING A BIKE THROUGH THE PHENOMENAL TRAFFIC OF SAIGON

One of the things that will undoubtedly stand out to you the moment you begin your journey as you disembark from the Tan Son Nhat Airport is the amount of motorcycles driving on the roads of Saigon. Motorcycles, or “bikes” as they are called in the local vernacular, are one of the most popular means of transport among Saigon locals. 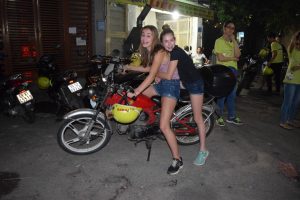 Bike tours, like Saigon on Bikes, are suitable for even families, as many bikes and riders can accommodate for even younger children.

And no wonder; they are perhaps the most convenient and efficient way of navigating the hustling and bustling city of Saigon. While buses and taxis are readily available to tourists in most parts of Saigon, exceedingly heavy traffic during rush hour periods mean that they can sometimes be unreliable in situations where time is of the essence. Traffic jams and other such impediments that might interfere with these more conventional means of touristic transportation are of no consequence to the traveler participating in the Saigon motorbike flow; making for a smoother and more eventful touristic experience. Another benefit of traveling via motorbikes in Saigon is the ability of these agile scooters that enable them to easily navigate through the smaller back alleys and lanes of the city, where many of Saigon’s treasures lie hidden, just waiting to be discovered.

Although, for safety and liability issues, only the most experienced of travelers should attempt to bike independently on the roads of Saigon, otherwise, a motorbike tour is recommended. Many Saigon motorbike tour companies can readily provide this experience to travelers looking to explore and experience what the city has to offer through the perspectives of the locals. 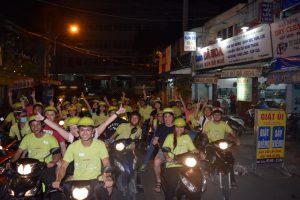 Bikes are one of the most convenient and efficient ways to explore the entirety of Saigon City and many companies, like Saigon on Bikes,  can facilitate that experience for tourists.

Coffee culture is a big part of many contemporary cosmopolitan societies, and Saigon is no exception. A must-try for any coffee connoisseur when visiting this city is the traditional “Vietnamese Coffee”, also known in the local tongue as “CÀ PHÊ SỮA ĐÁ”.  The coffee is exceptionally famous, and served in both the roadside stalls and more upscale establishments alike. It is made by placing medium to coarse ground dark-roast Vietnamese coffee grounds into a special drip filter. Boiling hot water is added to the grounds and the coffee is allowed to drip slowly into a cup of condensed milk that is placed below. The result is a strong, hearty, and delightfully sweet and creamy coffee blend that is guaranteed to satisfy even the most discriminating of palettes.  The resulting cup of coffee is then quickly poured into a glass full of ice, making the finished product: “Vietnamese Coffee”.

Cà Phê Sữa Đá being made: the metal container on the top holds the coarse coffee grounds and hot water, that is allowed to slowly drip into a cup containing about 3-4 spoonfuls of sweetened condensed milk below.

Coffee culture in Saigon is actually part of the city’s colonial history as well. It was first introduced to the Vietnamese people by Catholic French priests in 1857 and was gradually adopted by the Vietnamese people across the entire country. Coffee drinking was popularized and many regions of Vietnam boast their own unique blend or variation to this highly popular drink.   The adaptation of sweetened condensed milk to replace the more typical creamers, however, is a distinctively Vietnamese invention that was borne out of the limitations on the availability of fresh milk during Saigon’s infancy. By drinking a cup of “Vietnamese coffee” one is therefore not only participating in contemporary coffee culture, but in the rich and ever-evolving history of Vietnamese culture as well. 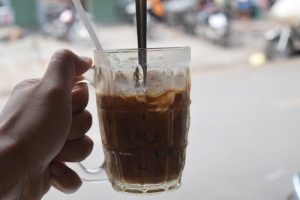 Even those who do not consider themselves a fan of coffee should try cà phê sữa đá once during their time in Saigon.

Like the “Vietnamese Iced Coffee”, “Bánh mì” (or as it is sometimes called in English: the Vietnamese Sandwich) is another food item that is absolutely not to be missed!  The term “Bánh mì” derives from two Vietnamese words; “bánh” meaning “bread” and “mì”, which means “wheat”.  Superficially, it is a Vietnamese reference to the baguette, which was (like the coffee) introduced to the Vietnamese people during the period of French colonial rule. 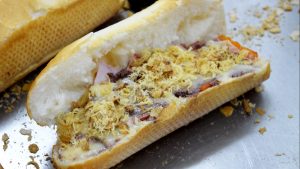 Unlike its Western counterpart, however, the Vietnamese variation of this baguette is often crispier and lighter, with more air pockets and a thinner, crunchier crust.

Colloquially, Bánh mì is eaten as a sandwich.  It is a symbol of how the Vietnamese people have reconciled with their colonial history, to produce a highly celebrated dish that is made out of the marriage of Western ingredients, such as the baguette, pate, jalapeño, and mayonnaise, with local Vietnamese delicacies such as coriander, cucumber, pickled carrots and white radish. Although Bánh mì is traditionally served with egg and pork, sandwiches can often be modified to suit the preferences of vegetarians or those whose religions prescribe various dietary restrictions, with the meat and eggs being replaced with tofu or seitan, or chicken. 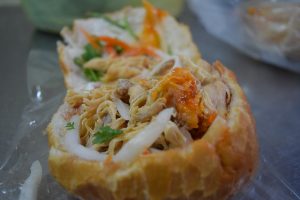 The “Vietnamese sandwich” is a beautiful and delectable example of fusion culture in Saigon. The dish, like the city, is a harmonious marriage of both Eastern and Western cultural and historical influences.

Not for the squeamish or the particularly faint of heart, “hột vịt lộn”, more popularly known in English as “balut”, is another local favorite that will undoubtedly test the spirit of adventure and resolve in even some of the most seasoned of travelers.  The dish consists of the developing embryo of a bird (typically a quail or a duck) that is then boiled while still inside of its egg and eaten straight from the shell.  The baby duck egg is allowed to incubate for up to 19 or 21 days, whereby the embryo is recognizable as a baby duck with bones that are said to be firm, but tender, once cooked. In terms of flavor, balut tastes almost exactly like a hard-boiled egg, with a distinct aroma of boiled duck flesh lightly blended into the mix. Often the two savory sensations are indistinguishable from one another, making a highly unique dish that that brings sophisticated flavors to even the most discerning palette.

The practice of consuming “baby duck egg” is believed to have originated in the Philippines, but has since spread to many parts of Southeast Asia. Outside of Southeast Asia, the consumption of baby duck egg is generally viewed as a novelty or a taboo but in Vietnam, the embryo is believed to be a nutritious restorative that can boost the sexual performance of men, or assist in the recovery of pregnant or delivering women. 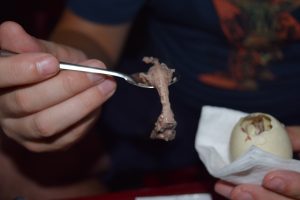 A cracked balut, with the duck embryo having been removed from the shell. In Vietnam, the embryo is typically allowed to develop longer, whereby the baby duck is more recognizable upon consumption.

Where both the “sandwich” and “iced coffee” represent fusions between Vietnamese and French cultures, the consumption of duck embryo is something that is unique to the customs of the local population.

In fact, the Vietnamese name for the dish “hột vịt lộn” already reveals to us some of the superstitions surrounding the locals’ belief of these baby duck eggs. The name is derived from the Vietnamese words “hột vịt”, which means duck egg, and “lộn”, which means “reverse”; a reference to the popular belief that consuming the underdeveloped embryo of the duck can “reverse” one’s luck.  One egg is considered to be half a circle and so if one is experiencing bad luck or ill-fortune, the consumption of one egg will “reverse” the situation by returning “good luck” to the person who consumes it. Conversely, one who is already lucky should always consume the eggs in even numbers (2, 4, 6… and so on) to ensure that the “circle” is completed, therefore maintaining their fortune. 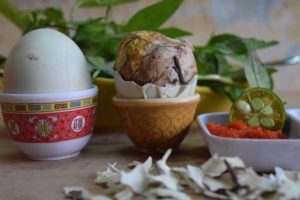 Traditionally, the eggs are consumed simply with just a pinch of salt, lemon juice, ground pepper (or ginger) and occasionally a sprinkling of Vietnamese mint leaves. However, some road side hawkers will also serve them with other sauces upon request.